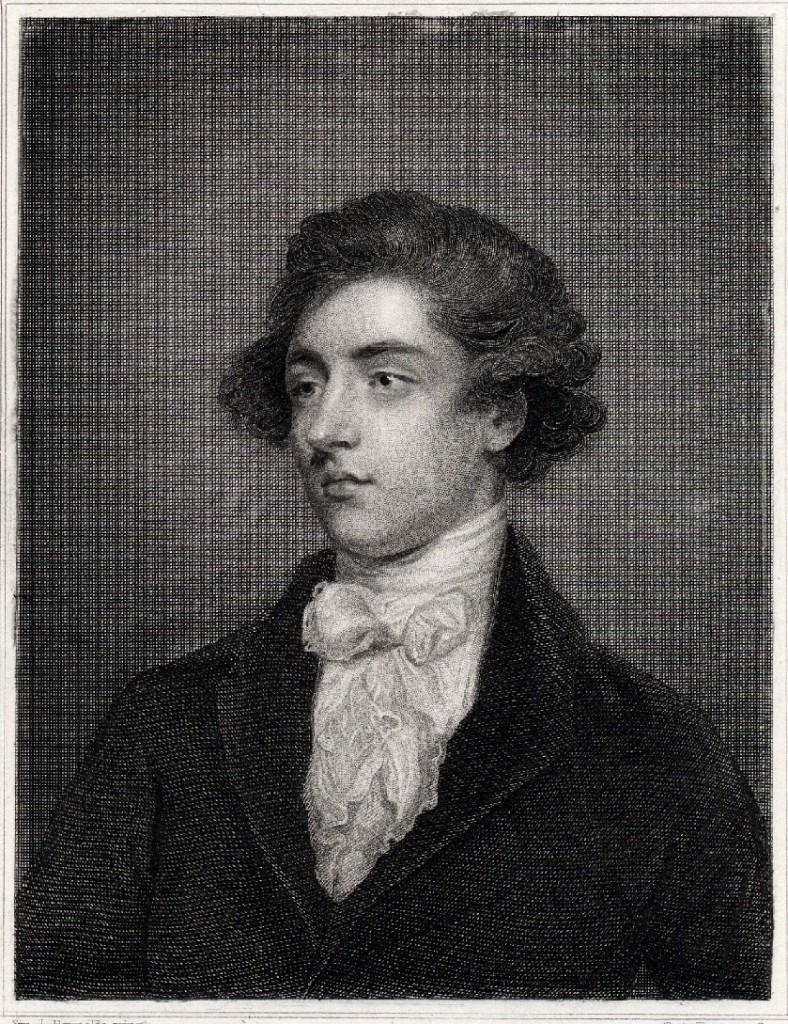 Born to great wealth and endowed with precocious talent, William Beckford (1760-1844) was a complex and fascinating character around whom legends grew, even in his own lifetime.

Using his immense wealth, built from the profits of the transatlantic slave trade, Beckford created Fonthill Abbey, a huge Gothic Revival house designed by James Wyatt, and built on Beckford’s Wiltshire estate. Less well known is Lansdown Tower, or ‘Beckford’s Tower’ as it is better known as today.

After selling Fonthill Abbey in 1822, Beckford moved to Bath where he continued to indulge his taste for building, landscape gardening, collecting and creating interiors. For the last 22 years of his life he pursued these interests with his usual passion and impetuousness, assisted by the young Bath architect Henry Edmund Goodridge. Beckford purchased the land behind his home in Lansdown Crescent to create a mile-long ride through a series of gardens and landscaped features to the summit of Lansdown Hill, where he built a 120-foot high Neoclassical tower, crowned with an octagonal lantern decorated with gilt gold columns.

The two main rooms at the base of the Tower, the Scarlet and Crimson Drawing Rooms, had rich carpets, luxurious curtains, and coffered ceilings panelled in oak and enriched with scarlet, crimson, purple and gold. The spiral staircase with its 154 steps leading up to the Belvedere was carpeted and at the centre of the stairwell stood a colossal vase of polished granite.

When Beckford died in 1844 his the Tower and Gardens were sold to a Bath publican. Beckford’s collection and all his remaining wealth was inherited by his daughter, the Duchess of Hamilton, and either sold or taken by her to Scotland.  She was horrified to discover that her father’s retreat was being used as a beer garden and promptly bought it back, gifting the empty Tower building and surrounding garden to the Parish of Walcot in Bath. The Tower became a funerary chapel and the Tower garden became a cemetery. The Tower building was sold in 1971 to the late Leslie and Elizabeth Hilliard, who in 1977 established the Beckford Tower Trust whose object is to maintain for public benefit the buildings, features and objects of historical and architectural interest relating to the life of William Beckford.  Since 1993 the Tower has been managed by the Bath Preservation Trust. 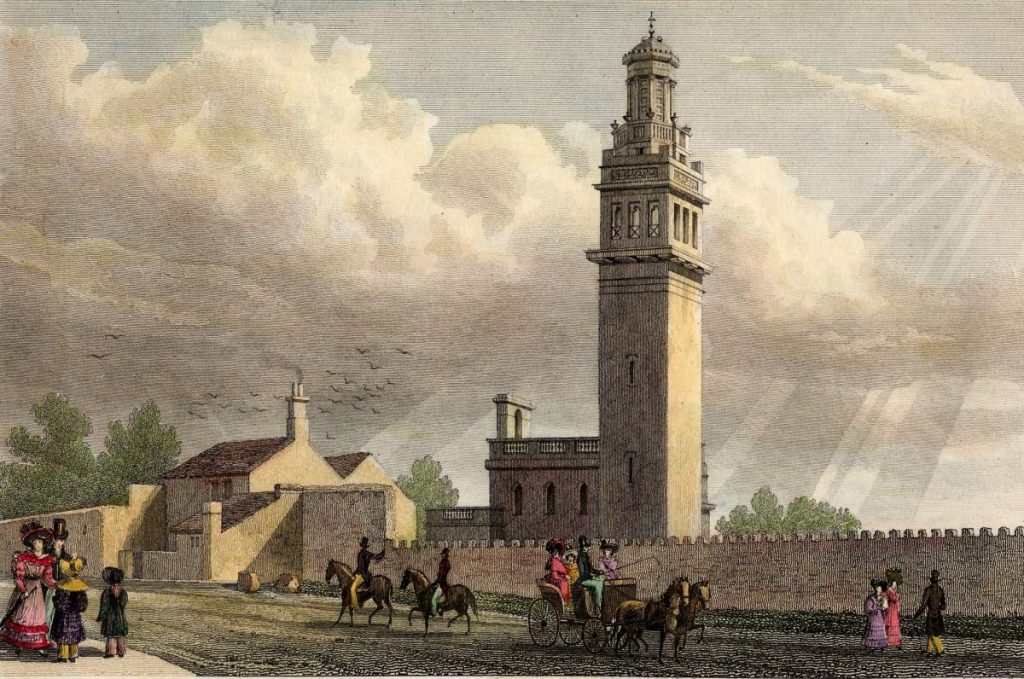 Beckford’s Tower was designed by Henry Edmund Goodridge in 1825 and completed in 1827 for William Beckford (1760-1844). The 120-foot neo-classical Tower, which enjoys uninterrupted views of the countryside, was constructed as a study retreat and to house Beckford’s precious collection of art, objects and rare books.

The surrounding Victorian Cemetery, containing William Beckford’s tomb, was in his lifetime part of a beautiful pleasure garden known as ‘Beckford’s Ride’, which ran from his house in Lansdown Crescent up to the Tower at the top of Lansdown Hill.

After Beckford’s death the building was emptied of its contents by Beckford’s daughter, the Duchess of Hamilton, who took most of her father’s collection to her home at Hamilton Palace in Scotland.  The Tower and its garden were sold to a Bath publican and the Duchess soon repurchased it not wanting it to become a beer garden, and gave it to the Parish of Walcot instead.  It became the parish cemetery and the Tower a mortuary chapel.

A fire in 1931 nearly destroyed much of the lower building and over the years the condition of the Tower itself began to worsen.  It was used as an observation post during the Second World War and started to be used increasingly less as a chapel.  In 1968 the Tower was reconsecrated and put up for sale by the Redundant Churches Commission.

The Tower  was sold in 1971 to the late Leslie and Elizabeth Hilliard.  They purchased an empty and dilapidated building and set about restoring it.  In 1971 the Hilliards opened the Tower to visitors at weekends for a small admission charge.  By 1973 they had also opened a small museum room and had begun to accumulate a collection of original Beckford objects and items relating to the Tower and the life and work of William Beckford.  In 1977 they established the Beckford Tower Trust by Deed of Trust and in the same year the Tower building was gifted by the Hilliards to the charity through a Deed of Gift.  The museum continued to increase in size as the Hilliards work increasingly promoted research into Beckford’s life and collection.

The Tower is now home to a museum collection displaying original furniture that has been found and brought back to the Tower, alongside paintings, prints and objects illustrating William Beckford’s life as a writer, collector, slave owner and social exile.

Visitors can follow in Beckford’s footsteps and climb the spiral staircase (pictured) to the beautifully restored Belvedere and experience the spectacular panoramic view of Bath.

Beckford and the Slave Trade 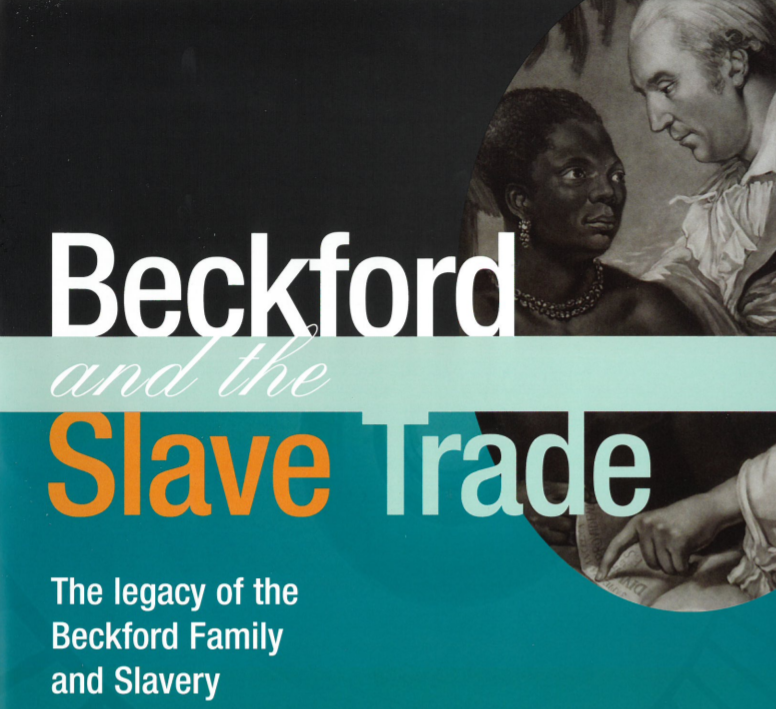 The history of the Beckford family is a tale of social ambition, political manoeuvrings and inexhaustible collecting.  It was all made possible by a huge family fortune built from the profits of the transatlantic slave trade and the stolen labour of thousands of enslaved Africans.

‘Our’ William Beckford was the only legitimate son of Alderman (William) Beckford, who as head of the Beckford family owned 13 Jamaican plantations, over 22,000 acres of land and claimed over 1,000 enslaved people as property. He was ostentatious in his displays of wealth, successful in politics and married into one of the great aristocratic families.  Everything he did was to ensure his family profited from the West Indies and he ran his family business with tyrannical strength. He died in 1770, when his son was just 9 years old.  William inherited everything.

Find out more here: The legacy of the Beckford Family and Slavery 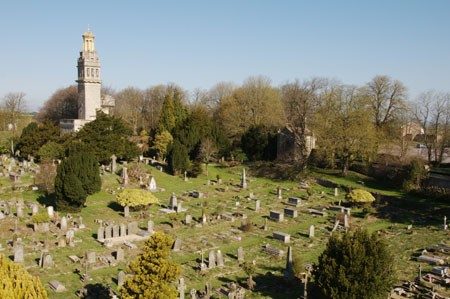 Steeped in history and with an intensely emotive atmosphere, a walk through Lansdown Cemetery enhances any visit to Beckford’s Tower.

When the Tower became a mortuary Chapel for the parish of Walcot the land that once made up the Tower gardens, the final part of Beckford’s Ride up to the Tower from Lansdown Crescent, became a cemetery. Now the site of over 5,000 graves, the Lansdown Cemetery is the final resting place of some of Bath’s most significant residents, including the architect of the Tower, H.E. Goodridge. Beckford’s monumental marble tomb sits isolated on its own island, surrounded by elaborate and interesting memorials.

The Beckford Tower Trust, in partnership with Bath and North East Somerset Council and Walcot Parish, is dedicated to the continuing conservation of the memorials, the surrounding ecology and the landscape of Lansdown Cemetery. 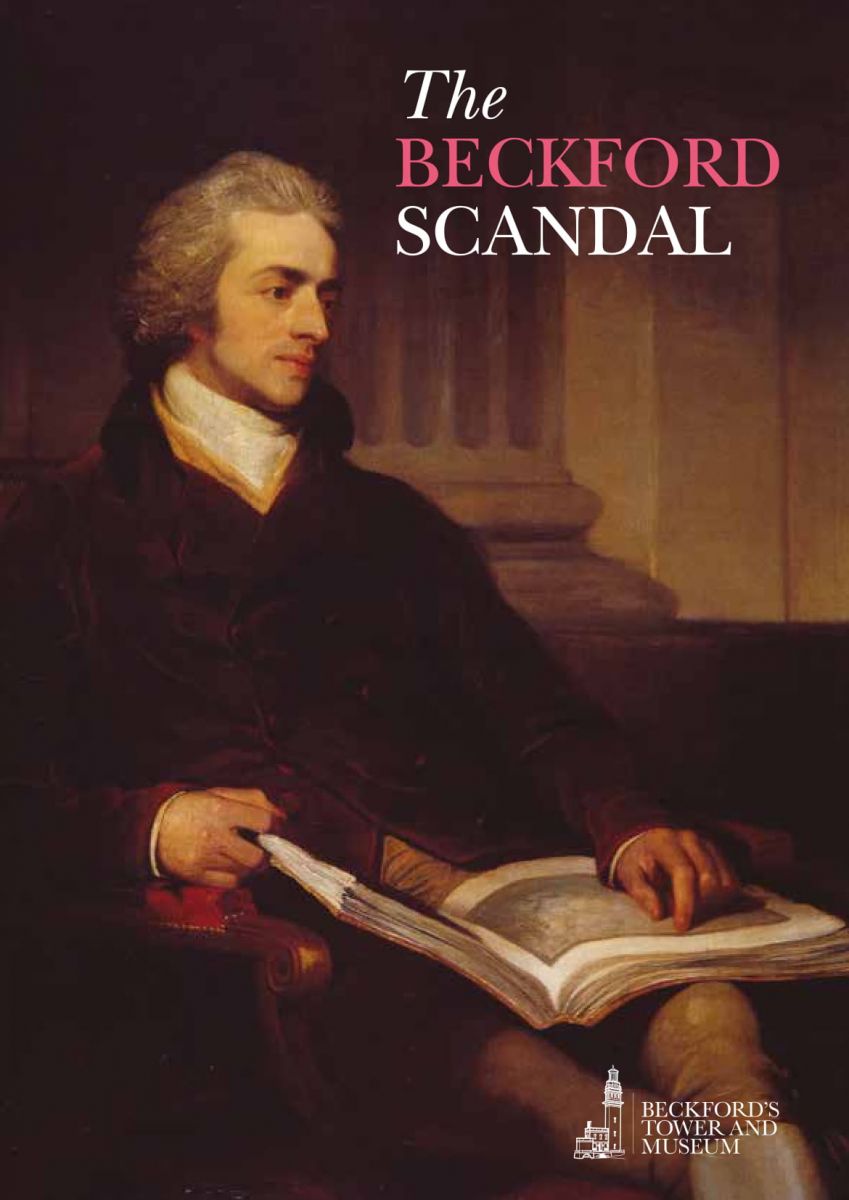 When William Beckford left England in 1785 he entered a period of exile that would last a decade. Having been one of the most celebrated members of 18th century society, for the rest of his life he would be a social outcast. The reason for this exile was the exposure of his relationship with William Courtenay, the heir to Powderham Castle in Devon.

For Beckford, the exposure of this homosexual relationship threatened not just social exile, but the risk of imprisonment and execution. Certain sexual acts between men had been defined as criminal and punishable by death since 1558, when Elizabeth I reinstated Henry VIII’s 1553 Buggery Act. During Beckford’s youth the high profile case of Captain Robert Jones in 1772 had resulted in England’s first public debate about homosexuality.

In Beckford’s lifetime the only way to escape the threat of arrest was to escape the country. Exile from England, and more importantly from his home at Fonthill in Wiltshire, had a powerful impact on the rest of Beckford’s life. His time spent in exile influenced everything from the evolution of Fonthill Abbey and its landscape in the 1790s, to the creation of his retreat from society in Bath at Lansdown Tower (more commonly known as Beckford’s Tower). 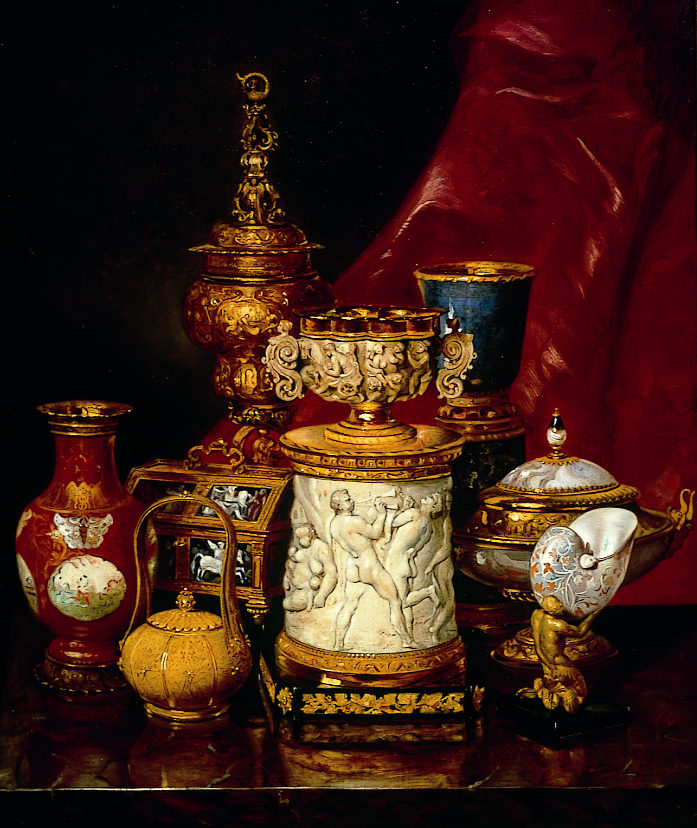 Extremely intelligent and well educated, as a young man Beckford developed a passion for collecting and his strong ideas about literature, architecture, art and nature became highly influential to the development of British aesthetics. Beckford spent his life creating what was one of the greatest collections of objects, paintings and furniture in Europe.

He built extravagant and monumental buildings to display his collection, but was extremely particular about who he allowed to see inside them. After his death in 1844 the collection was broken up and items once owned by Beckford can now be found in some of the world’s greatest museums and galleries. This booklet lists where in the United Kingdom some of Beckford’s collection can now be found. Tracing this trail of treasures offers an insight into a magnificent collection and the mind of an extraordinary collector.

Today the Tower is the only museum in the world dedicated to the life of William Beckford and is home to a collection of paintings, furniture and objects from his collection. Highlights include the original construction model for Fonthill Abbey; a monumental marble table designed for the Tower, and Beckford’s Objects of Vertu paintings

Beckford’s Tower has a small but good library collection and an extensive archive about the twentieth century history of the Tower building.  The library and archive is available to researchers by appointment. The library includes works by Beckford and books once owned by Beckford, as well as an extensive collection of publications related to Beckford’s writing, his architecture, and his collection.

To find out more contact the Tower curator, Dr Amy Frost, on beckford@bptrust.org.uk